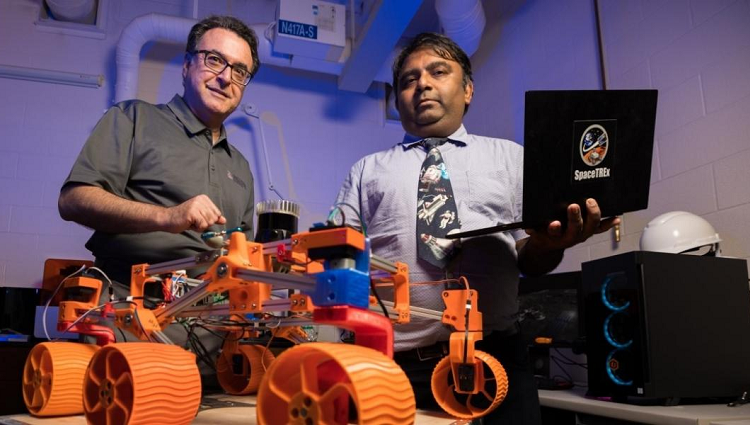 Jekan Thanga (right) and Moe Momayez have received $500,000 in NASA funding for a new project to advance space mining methods.

AME associate professor Jekan Thanga recently received $500,000 in NASA funding for a new project to advance lunar mining. Thanga is leading the project with interim head of the Department of Mining and Geological Engineering Moe Momayez to develop swarms of 3D-printed autonomous robots that may revolutionize future Moon missions.

The team plans to build and train the robots here on Earth, so they can practice. Ultimately, the researchers envision a fully autonomous swarm of robots that doesn't need to receive instructions from Earth to mine materials and construct simple structures. These robots are also designed to function well in the Moon's harsh environment.

“Even the Apollo astronauts had a lot of difficulty dealing with these conditions,” Thanga told KOLD. “Temperatures rise up plus 200 degrees in the hot sun, or below 150 in the nighttime. The other factors, of course, are the high radiation and then you have the lunar dust, which is very fine; it’s billions of years old, it’s very glassy like."

Thanga is adapting a neuromorphic learning architecture technique, which he developed in his lab, called the Human and Explainable Autonomous Robotic System, or HEART. The system not only will train robots to work together on mining, excavation and even building tasks, but it will also allow the robots to improve their collaboration skills over time.

The team still considers humans a critical part of space exploration, but these robot swarms could free up astronauts to focus on other critical mission elements.

“What we are trying to do is have robots do the dirty, the dull, the dangerous. That way humans are focused on the most interesting things," Thanga said. “The ultimate goal is permanent settlement. A second home apart from Earth, on the Moon."