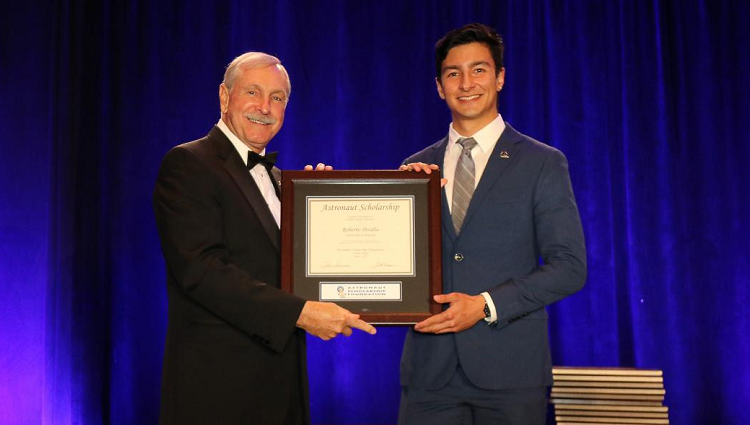 Mechanical engineering senior and National Hispanic Scholar Roberto Peralta has worked on projects ranging from flexible biomedical devices to Mars-exploring robots. He was recently named an Astronaut Scholar. The Astronaut Scholarship Foundation supports top scholars in science, technology, engineering and mathematics. It aids the United States in retaining world leadership in technology and innovation while commemorating the legacy of America’s pioneering astronauts. The 2021 Astronaut Scholar Class includes 60 students from across the nation.

Peralta grew up surrounded by engineers, including his father – who earned a bachelor’s and master’s degree from the University of Arizona and a PhD from Arizona State University in the 1980s – so STEM was a natural pathway. Peralta’s interest in serving a global community ties in with his enthusiasm for languages. As the child of two immigrants – his dad from Mexico and mom from Canada – he grew up speaking English and Spanish.

“I really like the sentiment from Nelson Mandela, that when you speak to people in their learned tongues, you’re speaking to their brains, but when you speak in their native languages, you speak directly to their hearts,” said Peralta, a member of the Society of Hispanic Professional Engineers and Tau Beta Pi, the National Engineering Honors Society.

In an interview with KGUN9, Peralta explained he plans to use his Astronaut Scholar winnings to help pay for the rest of undergrad, flight lessons to become a private pilot, and graduate school applications.

In an interview with KOLD, Peralta said that his interest in prosthetics came while on a high school mission trip to Haiti.

“I saw a lot of people who had been injured and lost limbs because of those earthquakes and natural disasters. Their prosthetics were limited to things that would strap onto their arms. It was really crude and rudimentary. I said, 'This is something that is really missing from the world,” Peralta said.

For his PhD, Peralta plans to major in biomedical engineering.

“Offering low-cost prosthetics that would have global reach is a way of touching hearts and lives,” he said. “I just hope I can help a lot of people – not just in my local community, but in my global community.”