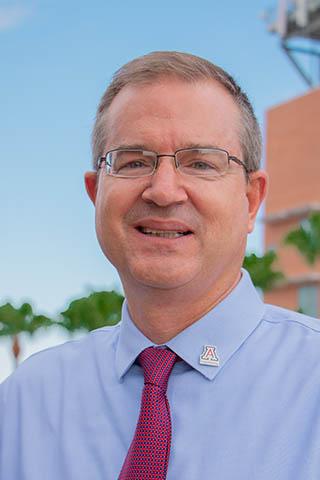 David W. Hahn, an accomplished mechanical engineer specializing in thermal sciences and laser-based diagnostics, including renewable energy and biophotonics, is the dean of the College of Engineering. He has more than two decades of experience in higher education and with national agencies and laboratories, and he is a champion of diversity in engineering.

Hahn takes the helm as the college embarks on the establishment of a four-year student design program with renewed commitment to strengthening hands-on education and focusing on today’s most pressing issues – food and water, energy, health care, and security.

He joins the University of Arizona after a 20-year career at the University of Florida, where he served most recently as chair of mechanical and aerospace engineering. Under his leadership, the university built a 4,000-square-foot student design center, his department grew to the largest on campus in terms of student enrollment, and the female student population in mechanical and aerospace engineering increased to 20%, about 50% above the national average.

He was the Herbert Wertheim College of Engineering 2007-2008 Teacher/Scholar of the Year and 2009-2010 Advisor/Mentor of the Year, and he received the UF Society of Women Engineers 2016-2017 Outstanding Support of Women in Engineering Award. Hahn is a fellow of the American Society of Mechanical Engineers, the Optical Society and the Society for Applied Spectroscopy.

Hahn began his research career as an NRC postdoctoral associate in the electro-optics branch of the U.S. Food and Drug Administration Center for Devices and Radiological Health. He then spent four years at Sandia National Laboratories, first as a postdoctoral researcher and then as a member of the technical staff.

Hahn studied mechanical engineering at Louisiana State University, graduating with a bachelor's degree in 1986 and a doctorate in 1992. In 2014 he received the Alumni Achievement Award from his home department.