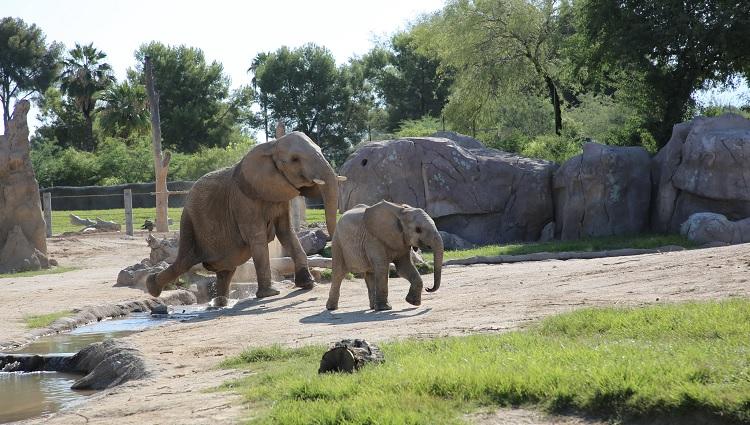 Reid Park Zoo elephants Semba and Penzi in their habitat.

Two mechanical engineering students are part of a capstone project team that is creating a snack delivery system for elephants. Workers at the Reid Park Zoo were so pleased with last year’s two capstone projects supported by the Craig M. Berge Community Project Fund, they organized patron funding for more in the 2021-2022 academic year.

For its capstone project, Team 22034 is building a machine that automatically shoots out treats into the elephant habitat at set times throughout the day. Zookeepers can also operate the machine remotely to dispense treats at will.

“Right now, the zookeepers walk along the edges and throw treats in the habitat, but this invention will hopefully be able to distribute treats to different areas of the habitat that the zookeepers can’t reach, helping to foster an environment where the elephants can search for food and pick it up themselves,” said mechanical engineering major and project leader Gabriella Vindiola.

The team has overcome several challenges. Using weatherproof materials – to combat Tucson’s summer sun and the fact that the machine itself generates heat – took up a chunk of the $4,000 budget, so the students couldn’t afford to create a device with two dispensing mechanisms to shoot treats in multiple directions. Instead, they made a rotating system.

“We selected 304 stainless steel for the electronic components in the launcher itself, and that’s got very good corrosion resistance. It’s kind of the industry standard,” said mechanical engineering major Tyler Gross.

Many students complete capstone projects at engineering companies, such as Honeywell or Raytheon, where sponsor advisors are well-versed in engineering project language. Working with zookeepers and animal welfare specialists has helped the students learn how to translate technical concepts into everyday language, and vice versa. For example, the zoo requested that the device not be too loud, so as not to disturb the animals, and the students had to determine a sound decibel cap. The zoo also asked that the machine dispense pellets with enough force for wide distribution, but not so much that the pellets could hurt the elephants. That meant trying out spring-powered and compressed air dispensers and testing a prototype in the habitat to make sure it didn’t bother the elephants.

“You think about engineering, and there’s so much in it,” Gross said. “There are a lot of gaps in my knowledge that are made up for by the other members of my team, so that’s been helpful. And, from a mechanical standpoint, I feel like I’ve applied most of the mechanics that I’ve learned in my courses to this project.”