AME Students Helping Astronomers Adapt to a Sky of Satellites 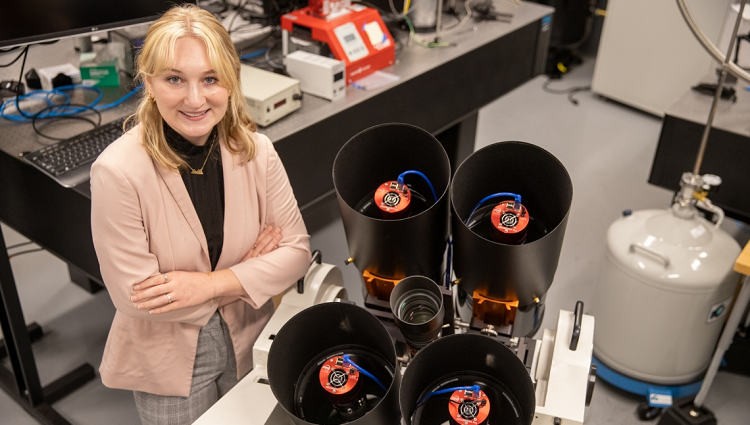 While still in school, AME students are receiving major industry experience with work that may impact science far in the future. AME graduate research assistant Tanner Campbell and AME undergrad Grace Halferty worked on a comprehensive study to track and characterize the "brightness of satellites" and how this may impact astronomers' abilities to see into space.

The research team was led by professor of planetary sciences Vishnu Reddy, who also co-leads – with study co-author and professor of systems and industrial engineering Roberto Furfaro – the university's Space Domain Awareness lab, which tracks and characterizes all kinds of objects orbiting Earth and the moon.

Halferty is the lead author of the study, which details how the team created a satellite tracking device to measure the brightness and position of SpaceX Starlink satellites and compared those observations to government satellite tracking data from the Space Track Catalog database.

"Until now, most photometric – or brightness – observations that were available were done by naked eye," Halferty said. "This is one of the first comprehensive photometric studies out there to go through peer review. The satellites are challenging to track with traditional astronomical telescopes, because they are so bright and fast-moving, so we built what's basically a small sensor with a camera lens ourselves because there was nothing off the shelf available."

The problem with these satellites is that they require power harvested from solar panels, which can reflect sunlight at ground-based telescopes and, in turn, impact astronomical observations from telescopes around the world. About 30% of all telescope images will be impacted by at least one satellite trail once the Starlink constellation is complete, Campbell said.

"As other constellations are added, the problem will only get worse for ground-based astronomical surveys," he said.

The team plans to build upon its success by studying the brightness of the latest generation of Starlink satellites in four different colored filters – the same ones used in astronomical surveys of the sky to tease out different information from stars, planets and more.