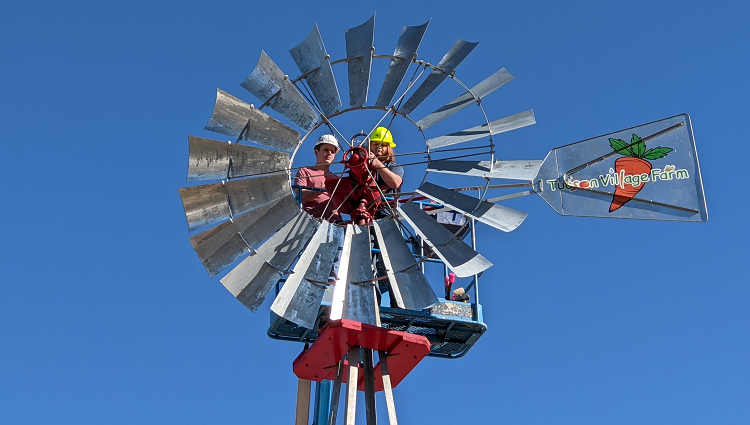 Three AME students' Interdisciplinary Capstone project at the Tucson Village Farm involves converting a decorative windmill into a power generator for one of its buildings. Not only will the project provide a community service, it also serves as positive youth development.

“I think a lot of us were interested in the fact that Tucson Village Farm was a nonprofit organization,” said mechanical engineering major and project procurement lead Justin Schoentag. “They’re definitely an organization that’s focused on doing helpful things for the community.”

But the students were not allowed to alter the aesthetics of the windmill, and considering that wind in Tucson is sporadic, they quickly realized powering a building as planned was not doable.

So the team worked with advisor Thom Plasse, a senior instructional specialist at the farm, to redefine the project scope. They shifted the plan to creating a standalone, off-grid educational demo for schoolchildren. Though the windmill can’t generate enough energy to power a building, it can produce enough to demonstrate the concept of wind energy to students.

The team is installing a metal locker at the base of the windmill to store controllers and batteries and an interactive plexiglass display on top.

“Kids will be able to rotate a little crank, and it will power a small motor to make a little bit of electricity, kind of like a windmill,” Schoentag said. “We’re also making our own little LED boxes to show how much electricity they’re producing compared to how much the windmill is producing.”

The Tucson Village Farm is a 4H youth development program that is part of University of Arizona Cooperative Extension.