Aiming for the Skies, Inspired by Aerospace Videos 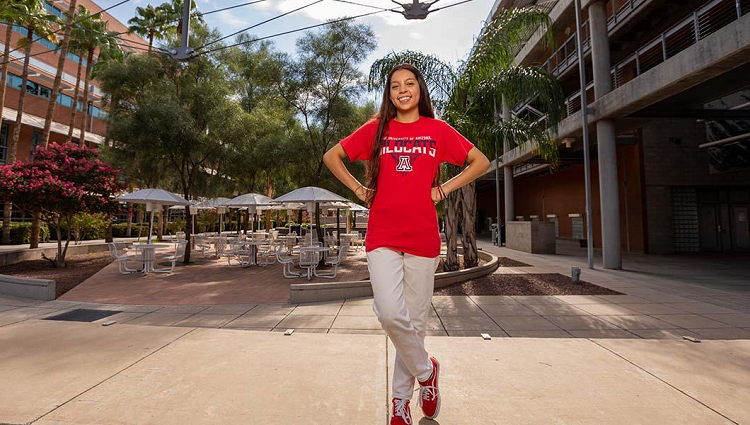 Emily Aguilar was already working on a certificate in aircraft mechanics when her high school counselor showed her some aerospace engineering videos that helped her choose an academic direction: an education at the University of Arizona.

"It was this mind-blowing experience. I said, 'This is what I want to do,'" she said.

Aguilar plans to design and build aircraft or, more likely, spacecraft. When she chose aerospace engineering as her career path, her parents remained supportive, but didn't entirely understand what she would be doing. Then they discovered UA graduate Teti Gómez on YouTube while looking for videos about the field.

Gómez is originally from El Salvador, as are Aguilar's parents. She led a research project sponsored by NASA before graduating in 2007 with an aerospace engineering degree. Now, Gómez is a commercial pilot and author as well as an engineer.

"They stumbled upon her and loved her. They said, 'This could be your inspiration. Imagine if you turned out like her. That would be so cool,'" Aguilar said.

Aguilar does take inspiration from Gómez, who has thrived in a traditionally male-dominated field. Aguilar hopes she, too, can inspire others to pursue careers in science, technology, engineering and math disciplines. She began the fall semester a first-year student – one of 744 new students in the College of Engineering who are helping create the largest and most diverse class in university history.